Separating the Fact from the Pseudo Science Fiction

Star Trek may have done us a disservice by providing us with the fanciful  pseudo science lexicon that has been enthusiastically adopted by enterprising online entrepreneurs and used to their advantage to sound persuasive in their marketing rhetoric. 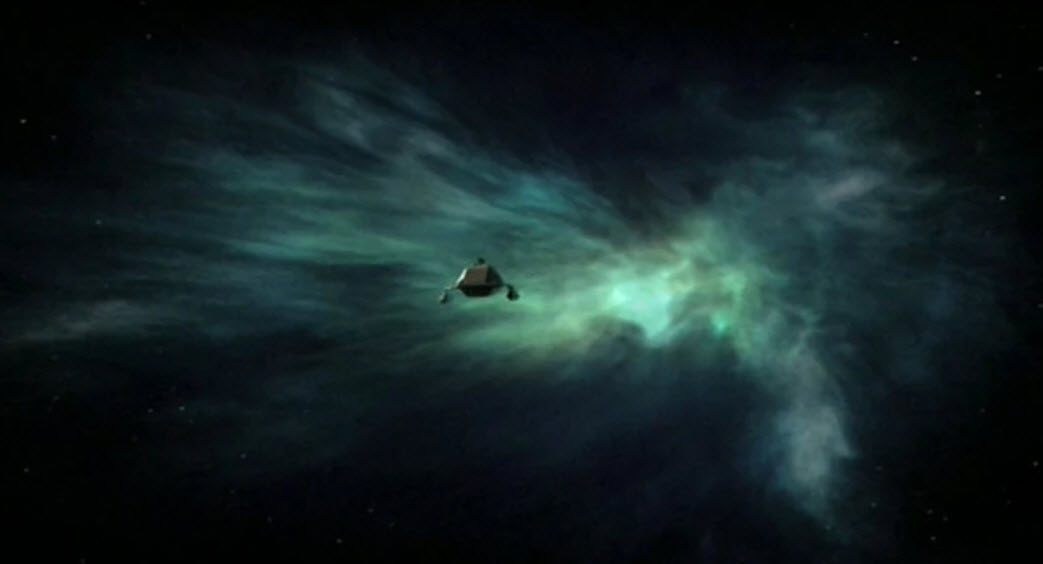 Photo: Admiral Janeway pilots a Tachyon emiting Chrono Detector to open up a temporal rift to return back in time, and orders the rift closed after her with an anti-tachyon pulse.

Let's look at some of the Star Trek catch phrases that are being used to market EMF products, to understand the distinction between genuine science and pseudo science, applying the definition of pseudo as "being apparently true as stated rather than actually true"

Once we have an understanding of what EMF actually is, and how it behaves, we find the internet replete with "too good to be true" EMF products that are not capable of offering authentic EMF detection and protection,  but nonetheless have a very persuasive, even convincingly scientific sounding, vocabulary and appearance of being able to do so.

A Few Common Examples of Pseudo Scientific Sleight of Hand

This is one of the most common phrases used out of context to market EMF protection products and energy devices, to the point where, to a trained electrical engineer's ears, in the way the word is used it is simply a pretend word, or more likely a pretense.

However, In actual fact, Scalar is a scientific term that applies to a field, it means the field is ‘scale-able’, in other words the value of the field can be adjusted with a number.  Scalar refers to a quantity, such as mass, length, or speed, that is completely specified by its magnitude and has no direction.  Scalar energy is just energy without a directional component to it, whereas the behavior of EMF is directional and infinite, as we now know through our accurate understanding of it.

Trying to establish a relationship between Scalar Fields and Electromagnetic Fields is like comparing apples (the fruit of a tree) and to cinnamon, (the bark of a tree); they are both fields but no mathematical conception or scientific  reasoning connects the two.  Apples are not good, and Cinnamon bad. Apples cannot cancel Cinnamon.  We know this because once we know that Electromagnetic Fields is one of four Forces of Nature, we know that Scalar Fields is not one of them.

This term is right out of Star Trek, borrowed loosely from theoretical physics to describe faster than light, and named the Chrono Deflector, a time travel-device invented by the Klingon Scientist, Korath, which produced a large amount of tachyon-kinetic energy as a byproduct of its operation.

The words Tachyon, and Tachyon Energy, have become larger than life in products offering EMF protection and other health benefits, when in fact (like Scalar Energy) they bear no relation to EMF or biology, but the word provides EMF-uneducated prospective buyers some semblance of scientific importance meant to instill buyer confidence.

Tachyon, as used in physics,  is a term that refers to any object or particle traveling faster than the speed of light, and since light is EMF, we know that electromagnetic radiation travels at the speed of light. A Tachyon though, unlike light, is hypothetical theory, yet nonetheless its intrigue has inspired many occurrences of it in fiction and in pseudo science. Tachyon energy therefore is hypothetical, in other words it does not exist; unlike EMF energy, which is quantifiable and measurable.

TRANSMUTATION  OF EMF’s INTO SAFE FREQUENCIES

Transmutation refers to the change of one substance into another. However, knowing how EMF behaves, you realize that if you were able to 'transmute' the EMF in your environment, no appliances or devices could function in that environment because everything is designed to work at a specific frequency.  EMF can be 'transmuted' (the real word here would be 'convert') into heat (to toast my bread), or motion (to run the motor in my blender), or even changed to a different frequency of EMF (to run my TV), but EMF cannot be altered to be another frequency and still work for the appliance or device it was designed to operate.

Piezo Electric Currents result from pressure and heat applied to crystals, for example, quartz, topaz tourmaline. Piezo electricity, which is a miniscule electrical current, is often used in the marketing material of products for EMF protection drawing conclusions that the positive 'vibrational frequencies' of piezoelectricity can somehow offset EMF's negative 'vibrational frequencies'.  Knowing the defining characteristics of EMF tells us that this cannot be a correct statement because EMF does not vibrate like a tuning fork, rather it oscillates (changes from plus to minus and back in a rythmic patten) in the electromagnetic field.

Furthermore, we know that EMF is not negative, nor is it positive, it is waves with positive and negative amplitude, which allow it to travel through space. To contradict a common pseudo science 'fact', EMF is not negative energy, rather, as we know once we understand what it actually is, EMF is electromagnetic radiant energy carried on the waves in the electromagnetic field, propagating (reproducing itself) through space.

BioGeometry is a conjoined word ostensibly invented to refer to the dimensional aspects of biology, or how space effects humans biologically.  Biology is a science and geometry is math, and  introducing products and training that claims how EMF acts in a space affects us, does not require a new scientific sounding word.  This simply requires an understanding of how EMF behaves according to its characteristics, which are true to its characteristics  in any space.

There are numerous other example of pseudo science words used by webpreneurs (online entrepreneurs), but in these example we can see how the words are selected, or invented, or manipulated, to impress and to sell, rather than to authentically explain. Understanding EMF allows us to see marketing ad-copy for what it is, and not as education.

Recognizing the "It's Not Even Wrong" Marketing Ploy

"Not Even Wrong!" is a phrase often used to describe pseudo science, or as it is sometimes called - bad science. And it is also used by marketers who are intent on basing their claims on what appears to be scientific fact.  The Not Even Wrong ploy refers to an argument or explanation that purports to be scientific but is based on faulty reasoning or speculative premises that can neither be proven correct, nor falsified, and thus cannot be discussed in a logical or scientific sense .  More on this fascinating subterfuge in Wikepedia.

EMF is not difficult to understand once you know how it works and how it behaves, and so if you cannot understand marketing text  with a high-school education, using words you do not have to look up, then it is likely intended to serve some other purpose than straight forward communication.

Wait, What about Pseudo Science & the Placebo Effect?

However, our training at EMF Experts is focused on EMF detection and protection that can be scientifically understood in accordance with the laws of physics, science and engineering.

A respectful nod to the placebo effect notwithstanding, these physical laws offer a vast abundance of protection through such simple practical means as distance, an understanding of EMF wave behavior, electrons, electric fields, magnetic fields, radio microwave radiation, our inherent biological electromagnetic systems, the application of shielding materials  etc. etc.– all practical information that offers us almost limitless protection from ever-rising EMF exposure. AND it is at the same time definable and measurable according to well understood physical laws.

The earlier reference to Star Trek was not in passing, it is not an accident that terms like Tachyon, Scalar, and Transmutation become household words without ever knowing what they really meant in terms of actual physics.

Interested in seeing how the Star Trek movies and TV shows used various behaviors and characteristics of Electromagnetism to advance pseudo science plots in the majority of episodes?  We can easily see where much of today's scientific sounding psycho-babble comes from.